Last weekend, I spoke about practice design at the USA Basketball Coaching Clinic in Mt. Vernon, New York. One big issue with practice design is the distinction between technique and skills, and the transferability of both to game situations. 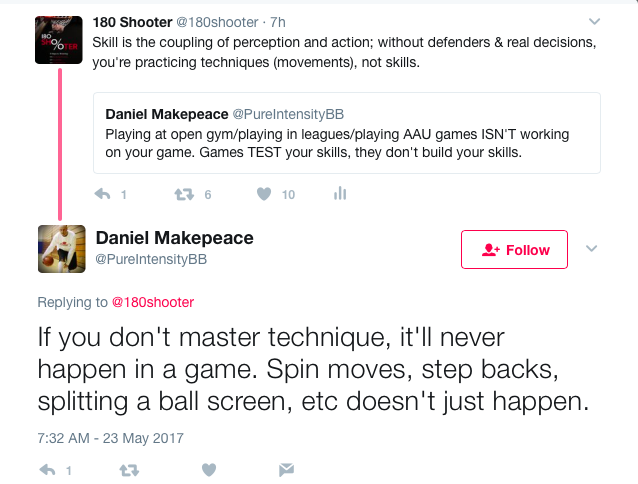 There are three arguments in the above exchange. First, a post that games, including open gyms/pickup games, do not build skills. If you take this to its logical conclusion, one might argue that practice scrimmages or small-sided games in practice do not build skills. Where does “game” end? If a coach calls 3v3 in practice a drill, does it build skill? As I have written extensively in the last 10 days in the Hard2Guard Player Development Newsletter, play is learning.

Second, I responded and defined skills and techniques as separate entities. Within the literature, that is not accepted, as the two tend to be used interchangeably, but within my writing, I separate the two to facilitate understanding. Techniques are the actions or movements; skills couple the perception, or the decision-making, with the action. Therefore, in most practice settings and drills, players practice techniques, not skills.

Finally, there is the chicken-and-egg argument; does technique precede skill or can one perform the skill without mastering the isolated technique? This changes the argument. The original argument centered on whether or not one can build skills without games; the third argument was that one must master technique before attempting something in games.

This is believed almost universally by coaches. This is why we do drills. This is why we start with the most simple actions. But, is it true? Can we perform actions in games that have not been mastered in practice? Yes.

I watched an NBA team’s workouts. The assistant coach had the point guard attack and shoot a goofy foot layup: a right-handed layup jumping off of the right foot. The player never managed to perform the move correctly.

Later, some guys played 3v3. The point guard attacked the basket, a 6’11 player rotated to stop the ball, and he stepped past with his right foot and shot a goofy foot layup. The coach stopped and got his attention. He told him that he had done it right. The player shook his head and said, “I don’t what I did. I just made the shot.”

Did the practice, as unsuccessful as it had been, enable him to shoot the layup during the game or did the task constraints — the angle of the drive, the rotation of the taller player, the speed of his drive, the lack of an available passing option — combine in a way that afforded no other finish?

Did the instruction and the individual practice build that skill or did the environment create the affordances for that skill execution?

Is unsuccessful practice enough to master a technique and transfer the skill to a game? Is there learning that occurs in game play? Can players perform moves and skills that they have never mastered in isolated practice?

Comments on this entry are closed.